The day has arrived.

The Obamas are leaving the White House.

Will be watching…. #POTUS

Over the past week, there has been an out pouring of emotion for the First couple. The change that is taking place is extreme…but I will not get political here!

I want to use this post to celebrate the grace, intelligence and style of Michelle LaVaughn Robinson Obama, the ‘girl from the South Side of Chicago‘. The moment Michelle acquired the title as the 44th #FLOTUS, she redefined the role with her bold yet classic fashion sende playing a key part in this.  Like the woman herself, her style choices were considered and purposeful.

Michelle Obama has been praised for redefining the idea of ‘American style’ and since 2009 this has been a collaborative effort with her stylist 35-year-old Meredith Koop, who up until recently did not give interviews to the press. As Michelle’s time in the White House was coming to an end, Koop was interviewed on by Harper’s Bazaar last October. Koop had been Michelle’s informal stylist when she was still in Chicago and over the past 8 years has worked with the First Lady to select items that championed new designers, that were accessible to everyday women and that waved the flag for the US. 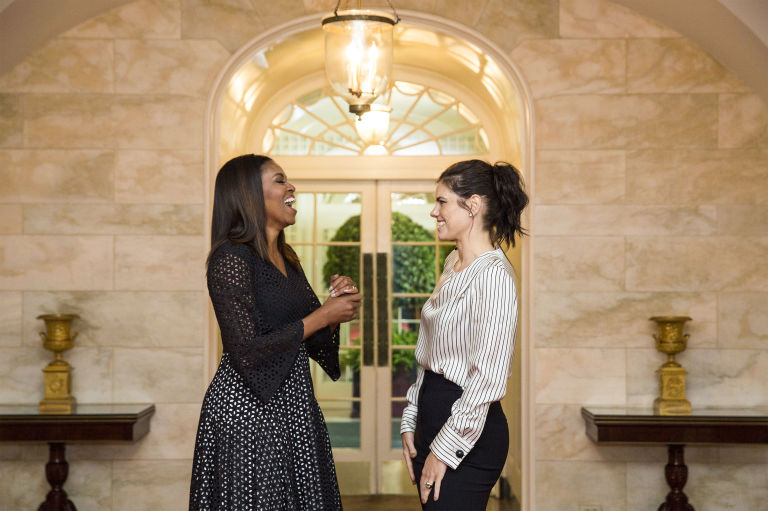 Michelle Obama with Meredith Koop prior to the 2016 National Student Poets ceremony in the White House, September 8, 2016; On Koop: Monse top and pants.
Official White House Photo by Amanda Lucidon

Koop summed up the power that Michelle exuded by wearing an item of clothing:

“When [the first lady] wears an up-and-coming designer, it creates this feeling that anything is possible. This is something the first lady talks a lot about with young people, how important it is to follow their dreams and work hard no matter what obstacles come their way. I wanted to translate that very message into her clothing.” 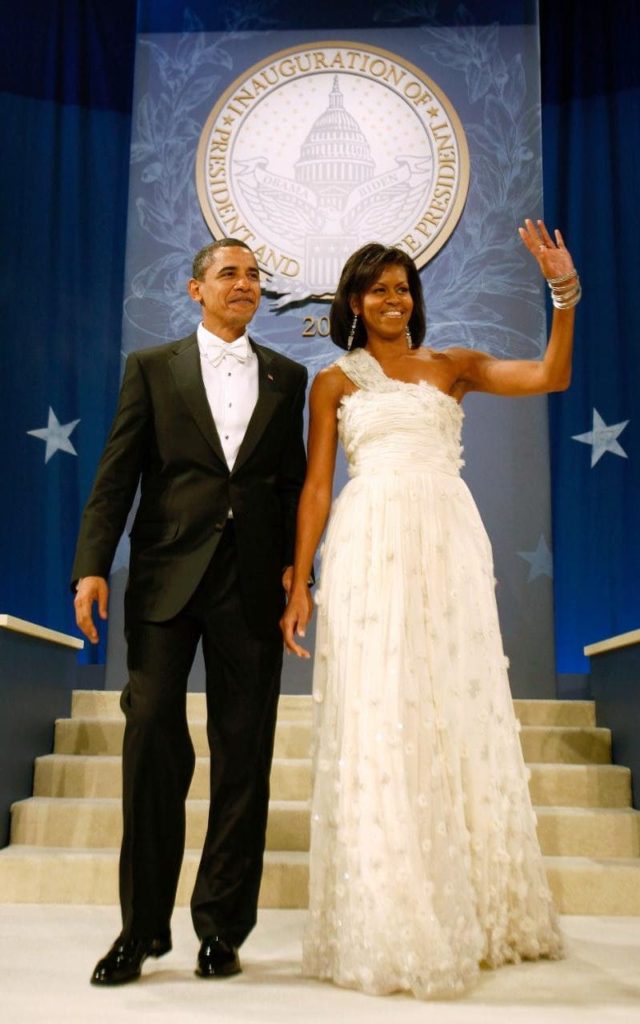 It has been shown that Michelle’s influence on the American fashion shopper added 2.7 billion (yes, BILLION) dollars to the value of the brands she wore in the first year of her role. This figure was verified by David Yermack, a business and finance professor at New York University’s Stern School, who looked at 29 clothing companies whose garments Michelle Obama wore in 189 public appearances between November 2008 and December 2009. Their stock prices typically jumped by 2 to 3 percent — and when the first lady wore J. Crew on “The Tonight Show” in October 2008, the company’s stock price climbed 25 percent in the next three days. Such increases that “cannot be attributed to normal market variations,” says Yermack in an article featured in The Week.

A number of these designers showed their heartfelt gratitude to Michelle with hand written letters this week. The aforementioned founder of J.Crew, Jenna Lyons and designer Jason Wu shared their sentiments, along with Joseph Altuzarra, Christian Siriano, Monique Lhuillier, Jenna Lyons, Prabal Gurung and Marchesa’s Georgina Chapman and Keren Craig.

First Lady Michelle Obama has left a mark on American fashion that will forever be a part of her legacy. Here, J Crew shows their gratitude. Link in bio for more designer thank you notes written to the First Lady. #wwdeye #letterstomichelle

“You inspire me and I am so proud to play a small part in your most extraordinary legacy.” – Jason Wu #letterstomichelle

You can read the letters on the WWD website.

Michelle also had an acute understanding of the importance that her style played in diplomacy. “We always take into account where we are going and that country’s cultural norms,” says Koop. “The goal is to pay tribute to each place we visit [while] never losing the spirit of the United States.”

For her visit to London last year to promote her Let Girls Learn campaign, the First Lady wore an all-British wardrobe of Christopher Kane, Preen by Thornton Bregazzi, and Mary Katrantzou. 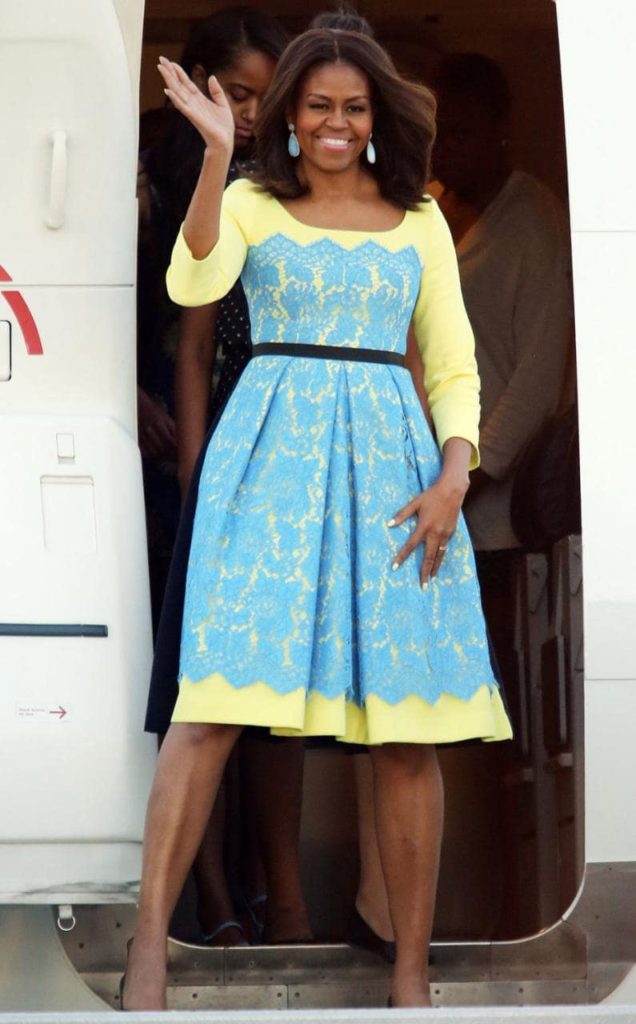 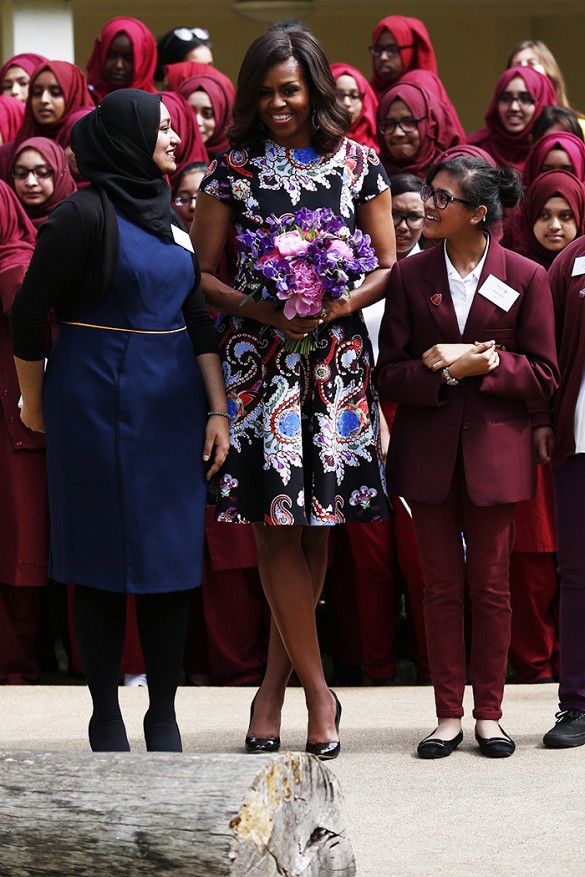 For her final speech, Michelle wore another favourite designer of hers, Narciso Rodriguez. It was a vibrant red dress that complimented her beauty and was emblematic of her style. My caption on an IG post that features the dress sums up what her presence on the world stage has meant to me.

Mrs Michelle Obama. You have been such an inspiration and role model for Black women across the world. . Intelligent Black women who are told ‘rein in’ their intellect in order to appease the expectations (or lack thereof) of others. . Dark skinned Black women whom have been told directly and indirectly that their beauty is inferior. . You have demonstrated grace and poise in the face of the fiercest (and unwarranted) criticism by those whom despised JUST for being Black. . Your speeches have transformed a generation. Your elegance and fashion sense added billions to the US economy. Your hugs seemed genuine and not forced. You have made a real difference and have given the world quotes that will be used for years to come. . You were chosen to make history ‘for a time such as this’. . Your presence on my TV screen, on the cover of magazines and in the social media sphere affirmed my own worth and place in society. . I will miss your presence at the White House, but I know your next phase in life will be just as, if not more remarkable. . Thank you. #MichelleObama #sundaythoughts #inspiration

I know this is not the last we will see of Mrs O, but until then, I am thankful to have been able to witness her tenure as the first Black First Lady of the United States of America.