Ever since the BB revolution hit the UK, there has been a disquiet among us dark skin beauties..
…where were OUR shades of BB creams?

I addressed the issue in this post and fellow beauty bloggers Muslimah Beauty, Beauty by a Disneyvore and Dija’s World also brought their chagrin to the fore! Dija, the author of Dija’s World recent post ‘Make Up Apartheid’ put it aptly;

“Why do I as a black consumer have to wait to the end of the year for something all my white and Asian friends are enjoying now? Why don’t I have the same options open to me? This is 2012! The year that a mixed race girl Jessica Ennis won gold at the Olympics, Nicola Adams, blacker than me, is Olympic boxing champion. My Caribbean sisters of all different hues of black skin tones made and broke records! Venus and Serena showed their prowess and love of make on the tennis courts in front of a world wide audience. Women of all colours are on an equal stage right now in all aspects of life. So why isn’t there still a level playing field in make up. Why I’m I feeling second best to the white girls? My life and outlook is comparable at all levels. I and other black women want the same options and choices with our make up. That can’t be too much to ask, can it?”

The BB cream phenomenon took the British beauty industry by storm since they were first introduced about this time last year..if this product is so life changing, how on earth is it possible that ALL of the mainstream brands (yes, EVERY SINGLE ONE – even MAC and Bobbi Brown) has failed to create a line that I could use??

The fact is, in 2012, I am still being told (directly and indirectly) by the British Beauty industry that it does not cater for me – and this is quite frankly ridiculous!

Once again, the woman of colour and her beauty needs were overlooked.

After her above post, Dija was contacted by the press team at Sleek MakeUP, who sent her a sample of their Be Beautiful Blemish Balm – which is due to hit the stores tomorrow!!

Here is her verdict!

So after my rant, the lovely people of Sleek MakeUP got in touch with me and sent me 2 samples of their Be Beautiful Blemish. 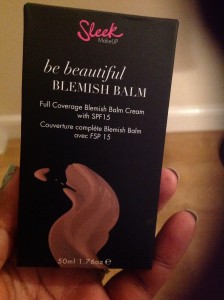 Now, I’m going to be honest, so don’t judge me. Sometimes I can be a product snob when it comes to stuff going on my face. So for that reason, I put my hands up and say I’ve never tried any Sleek Products. But if there was ever a time, when one has egg on their face that time is now. The BB cream has outperformed a lot of my current foundations and at the moment I’m putting it on par with my Chanel in terms of favourites and performance.

I was sent medium and dark to try. The medium was way too light for me, so I quickly moved on to the dark, which was absolutely perfect and blended in something amazing. Like my skin but better! They are right when they say its skin perfecting. It’s virtually flawless and has a nice little glow to it as well. It provides full coverage, so that makes it rather thick. I always thought BB creams where sheer coverage, so that was a bit of a surprise. Though I am concerned already that I won’t be able to get all the product out due to the design of the tube.

Its packed full of goodness too, with red algae extract to prevent skin crinckles (wrinkles) and help hold moisture in the skin to plump it out. The glow is the result of Vitamin C which brightens and also there’s SPF 15 in it to protect against harmful sun rays. For a small product at £8.99 it really does give a mighty punch. 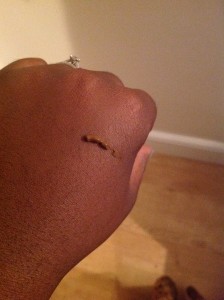 In terms of wear, for me it’s great. It lasts most of the day and I’ve been really impressed with this. I tend to blot and touch up about lunchtime most days but with this I’m looking in my vanity mirror on my desk (yes, I am vain like that) and there’s nothing to touch up. Took me so much by surprise! May also be due to my new Estee Lauder primer. Who knows?! And when I do touch up, it just minor on my t zone area. It also doesn’t feel heavy or caked on my skin. I wore it in the gym the other night and I still felt my skin could breath. 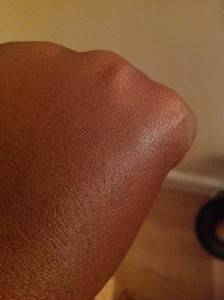 Can you see it? Perfecting blending.

In short, I really like this BB Cream and I am so pleased that Sleek stepped up and made one for dark skin tones. Goes to show, that it is possible. There’s so many things you can use it for as well. You can use it very lightly as a primer or its thick enough to use as a concealer too. There are 2 other shades available as well – fair and light. So hopefully one for everyone. Round of applause for Sleek MakeUP!

Available from Superdrug and online at Sleek MakeUP.

← High Street Chic – Black Beauty in the Media: July/August 2012 pt. 2
Join me and other stunning Women of Colour at the September Keziah CONNECTIONS Nurture and Network™ Evening ! →

7 comments for “Guest Post! @SleekMakeUP Be Beautiful Blemish Balm by Dija of @DijasWorld”