It is such a glorious day in London today!  A fabulous way to wrap up what has been a busy, but fun and productive week!

I have just finished a series of meetings and wanted to squeeze in this post before I head off to my final meeting for the day (I am also enjoying my half-priced Starbucks Frappuccino – what a brilliant promotion)!!

It is all go, go , go at the moment, but I made sure that I scheduled in some leisure time this week!  This came in the form of a magnificent concert by the tenor of the moment, Noah Stewart, whom I saw perform on Tuesday evening.

I went to the concert with my good friend and fellow blogger Gillian King of the London Chronicler.  Gillian wrote an excellent piece on Noah Stewart, when he topped the UK Classical Charts back in  April – a piece I featured on my blog, thus I was keen to also feature her review of what was truly a wonderful evening!

An Evening with Noah Stewart by Gillian King 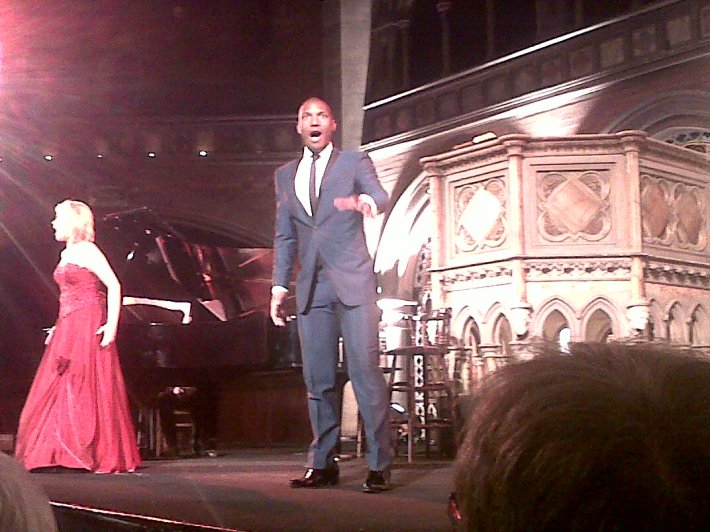 It was a brilliantly hot, summer day in London, a rare feature of British weather most of the time, but even more so recently, as I found myself having to wear a coat in May! It was a good reason to be cheerful when the temperature climbed and kept climbing all day, but alas, I wasn’t cheerful, I was exhausted!I’d had an exhausting weekend and a busy day on Monday, so I really wasn’t looking forward to going out on Tuesday evening, to An Evening with Noah Stewart, a concert by THE fast rising tenor who recently topped the classical charts and whom I have previously blogged about.

Frankly, I was inclined to have as much rest as my body needed but since the ticket was already bought and paid for, it would be a shame to waste it and I was sure my friend and fellow blogger, BeautypulseLondon, would rather go with a friend than go alone .

So I dragged myself off the sofa and went in search of something to wear and decided to cheer myself up with a bling jacket I hadn’t worn in ages!

We decided to get there early because there was no allocated seating in the venue, the Union Chapel, a popular venue for music in Islington, a charming old church with pews and beautiful stained glass windows that gave the evening an intimate feel.  The excitement started from outside, as we saw the queue that had formed, even though we were over an hour early! 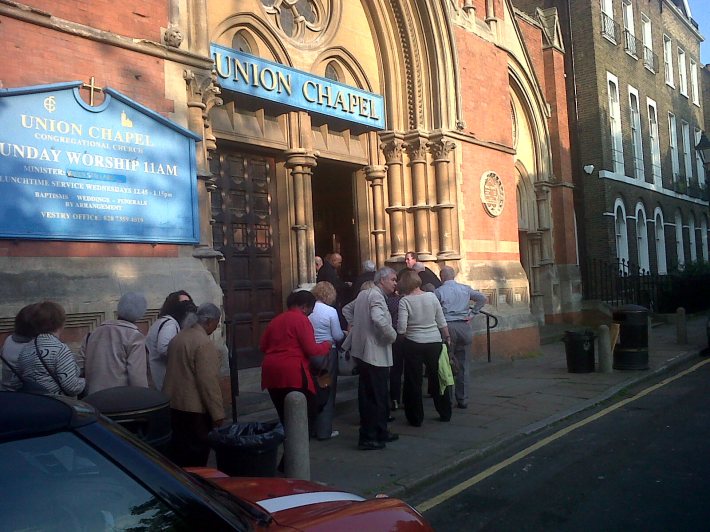 Noah’s voice from the first note of Recondita Armonia from Puccini’s Tosca, was strong, beautiful and immediately commanded attention. He was really adept at communicating with the audience, capturing our imagination and keeping us riveted to his extraordinary talent and at the end of every song, you felt you could do with some more.

There was a variety in his repertoire, which included a couple of duets with soprano, Kathryn Rudge and though I personally, would have preferred more arias from famous operas, the diversity showed off Noah’s talents and his ability to adapt some popular songs to his style.  His performance of Amazing Grace, Deep River and Witness ( the latter are spirituals) alluded to his origins and he further endeared the audience by introducing his mother, a petite woman with a beautiful smile, who was asked by some in the audience to sign autographs afterwards!

It was difficult to choose one performance as my favourite because he brought an enthusiasm, authenticity and confidence to each performance that was just a joy to behold.  I must say that some classical singers (admittedly more so sopranos than tenors) ‘work hard’ when they sing, which is understandable because, it’s seriously hard work! Noah’s secret is that he makes it look effortless, he’s relaxed and enjoys his work and so we enjoy it too.

In introducing Ave Maria, Noah says he was inspired by Mario Lanza‘s voice, which he described as having, ‘Strength, beauty and many colours.’ I would use those words to describe his singing.  If I had to choose a favourite, it would have to be his final song, Without a Song, that recently topped the classical chart.

Again he mainstreams classical really well and in introducing it he said, ‘It has been so special sharing my gift with you….. I think we are all the same, everyone has a soul, everyone has a spirit and everyone has a song.’  Maybe that’s why I enjoyed it so much, because Noah, singing his song so well, sharing his gift with us, made the world instantly, a better place. Of course, it doesn’t hurt that he’s so gorgeous!  As gorgeous in person, as he is in his pictures. Not an air brush in sight!

It was no surprise that he got a standing ovation at the end and gave two encores. My evening with Noah Stewart is one that I will remember for a long time, as one which is too difficult to describe with words and so I look forward to his next visit to London in the spring of 2013, when he will be at the Royal Albert Hall.  I suggest you get tickets, I certainly will!

← Cosmo Blog Awards 2012 – You’ve Got To Be In It To Win It!
@TONIANDGUYUK REGENT STREET WIN THE ESTEEMED 2012 MIZANI AFRO CATWALK LOOK AWARD →