The month of March kicked off with the annual celebration of women across the globe marked by IWD2020…as the news of the veracity of the impact of COVID-19 on our every day lives began to gain pace.

I had booked tickets for two events celebrating diverse women and their achievements earlier in the year: The British Vogue x (Women of the World) WOW London 2020 evening, hosted by the editor of the magazine Edward Enninful at the Southbank Centre, that took place on March 7 and a ‘Conversation with Bernardine Evaristo’ compared by the BBC’s Samira (get your coins girl!) Ahmed at the National Theatre that took place the following week.

I was expecting to receive the cancellation email for both of these events, however they went ahead – albeit with a reduced attendance.
Life before #selfisolation!!!

Force for Change – an evening of intimate discussion

I was extremely keen to attend this event when it was announced as not only was it a chance to hear from the imitable Edward Enninful, whose impact on diversity and inclusion in the fashion and beauty industries has been transformative. The evening was also a celebration of the success of the Forces for Change issue, that was guest edited by Meghan Markle.

I’m so pleased to present the very first @BritishVogue #ForcesForChange event, the Change-Maker Talks, as part of the 10th anniversary @WOWGlobal Festival in @SouthbankCentre’s Queen Elizabeth Hall. Join me and a host of my dear friends, including the formidable @SalmaHayek, on Saturday 7 March for an evening of intimate discussion and inspiration. #SalmaHayek photographed by @TheRealPeterLindbergh for British Vogue's September 2019 Forces For Change issue.

This success was important in so many ways. It demonstrated that women will support women when it is vital, as Meghan was by now facing incessant attacks by the mainstream media. It also showed that diverse voices are critical and valued (as well as valuable, the issue was the FASTEST selling in the entire history of the publication!).

As a panelist at past WOW festivals, the event holds a special place in my heart, so it was great to witness the 10th anniversary.

Selma Heyak dropped some gems as she regaled tales of the overt racism and sexism she has faced over her 25 year career and how she over came this to become a leading actress and how she used her platform to advocate for the sufferers of domestic violence.

Salma Heyek kept it 💯 with regards to the racism & sexism she has experienced in her 25 year career..but also highlighted how she influenced Avon to take on the cause of #domesticviolence in an era that regarded the topic to be taboo #WOWLDN #IWD2020 #forcesforchange pic.twitter.com/3z27NvdeVo

Salma’s keynote talk was followed by two panel discussions – a focus on the world of work hosted by British Vogue’s Vanessa Kingori and a discussion about inclusion for all, with June Sarpong on the panel. 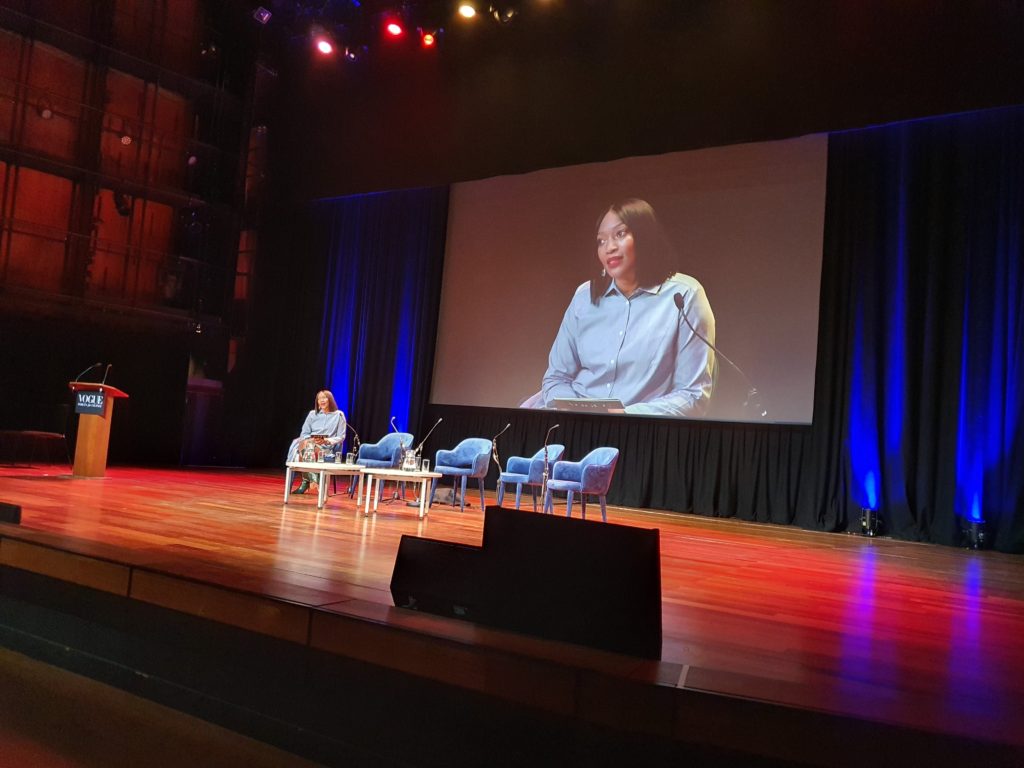 A conversation with Bernardine Evaristo

It is hard to believe that it was just a week ago that this evening took place, so much has changed for the nation in just seven days, and the National Theatre along with all of the West End and art venues across the country are now closed.

After Bernardine’s historic Booker Prize win for her eighth novel Girl, Woman, Other last year, I had made a mental note to look out for any public appearances she would make as I wanted to hear from the lady herself!

Samira Ahmed was the perfect host, a seasoned presenter with an expertise in the arts. She was able to elicit a natural but enlightening conversation, where Bernadine shared her upbringing (Catholic school!), her start as an actress and theatre writer (she never performed professionally and it was her first time being on the NT stage that night!), her identity as a black British woman (despite her dual heritage) and of course life after her Booker Prize win (people were now ‘honoured‘ to work with her!). 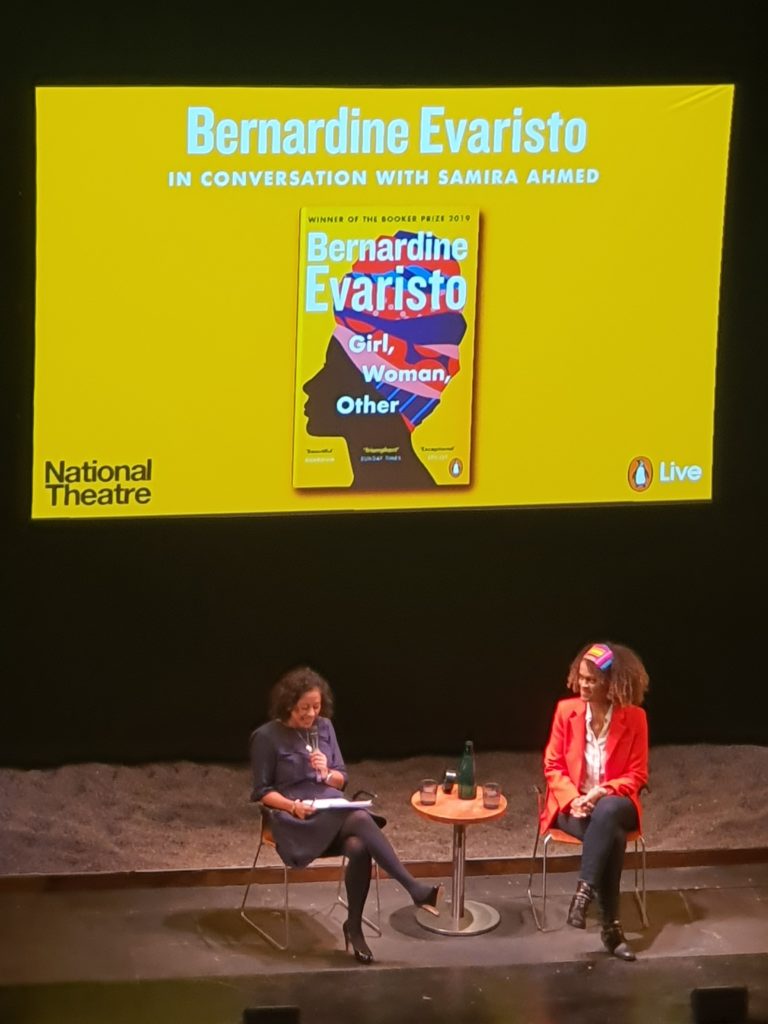 Bernardine will be in conversation with journalist, writer and broadcaster @SamiraAhmedUK.

A key takeaway that was discussed was that of power – who has it, how it can be attained and what was sacrificed to do so. It was a poignant topic when centred on the Black British female experience and provided much food for thought. How will the power structures of today adapt to the rise in the presence of the empowered Black woman?

I can’t wait to delve into the novel!

Had a fantastic evening last night in the presence of @BernardineEvari at the @NationalTheatre !

The conversation between Bernadine and #SamiraAhmed was insightful and revelatory and the readings were a delight to listen to!

Both of these events and the women they showcased was a celebration of togetherness. Amid candid discussion and conversation, addressing inequalities both past and present, as well as opportunities for a better future, one could not help leaving inspired.