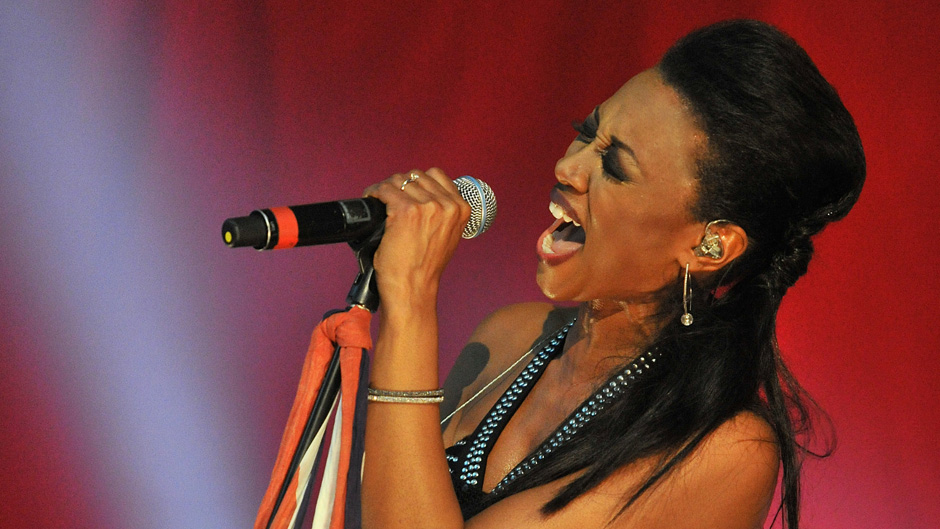 This time last week I woke up still BUZZING from a fantastic night I had had the previous evening, at the famous Royal Albert Hall – where I  joined thousands of soul lovers for the London leg of  Beverley Knight’s (MBE)  Soul UK Tour, which correlates with the launch of her latest album of the same name.

Often dubbed the ‘Queen of UK Soul’ – I was really not prepared for the outstanding level of pure, unadulterated talent that this beautiful woman possesses – she can really sing – like REALLY sing!  Her vocal range is magnificent and her pitch impeccable.  She truly deserves her title and she reigns supreme.

Born in Wolverhampton in 1973, to a Jamaican family, with Gospel music and Sam Cooke filling her home, Beverley burst onto the music scene in 1995 with her club classic debut, ” Flavour of the Old School”.

With over 17 years  worth of hits and 8 albums to date – Beverley and her incredible band took the audience on an explosive, melodic retrospective of British Soul –  which in her words does not “get the recognition it deserves”.   As well as performing some of her best known tracks such as ” Shoulda Coulda Woulda” and “Greatest Day“, she paid homage to some of the greats of  British Soul such as Soul II Soul and The Young Disciples (they wrote and sang ‘Apparently Nothing’ (…nothing apparently…you know that one,  don’t you!).

She also looked AMAZING!!  Numerous costume changes kept us entertained and enthralled – and she exuded the confidence of someone who is 100% at ease with her (enviably toned) body, which was really great to see!

In a recent interview in the autumn edition of  Blackhair magazine , Knight divulged that she worked hard to maintain her figure by working out and eating in moderation – no Diva-style cabbage diets here – just a good old common sense approach.

The same interview also discussed Beverley’s make-up brand ‘K’.  I can remember the buzz about the launch of her brand!!  Exclusive to the beauty mecca that is Selfridges – I was over the moon  to see a British brand being launched to meet the needs of  British Women of Colour.  Unfortunately the line was delisted earlier this year.

Knight states that “… [with] ventures that involve anything to do with black skin or beauty…there seems to be an issue either with marketing or distribution.  Like many others I came up against the same problem”.

The company that was behind the distribution of the brand was Jigsaw Esl.  A PR friend of mine recently regaled her experience with the the company.  She was not impressed with the communications team at Jigsaw Esl, stating her frustration at what seemed a lack of dedication to the brand.   She stated that she contacted the organisation on several occasions,  asking  for the official press release – but was pushed from pillar to post and received  nothing in the end.  It seemed, to her at least, that Beverley’s brand was NOT on the top of their agenda in the slightest….

But it’s is not all doom and gloom, Beverley promised Blackhair magazine that the range would be back in 2012!!  I will be keeping my eye out for the re-launch and I wish Beverley all the success in the world!

Whilst you are waiting, you can buy UK Soul, by Beverley Knight here.

← My Black is Beautiful Too! Feat. @MBIB
Hair to the Throne →