Weave Vs Natural? Does it really matter?

Well most of you are fully aware that I had the honour to be part of the panel for the aforementioned debate at the Southbank’s Woman of the World Festival earlier this month. It was a fantastic experience and it was really encouraging to see the room full with women (and a few men) of all backgrounds ready to partake in this discussion.

Being on the panel I knew that it would be nigh on impossible to capture the essence of the afternoon in its fullest so I asked my good friend and fellow beauty blogger Segun, author of the blog Lotions Potions and Me (do check it out!!).

Hi BeautyPulseLondon Readers, It’s Segun from Lotions Potions and Me and I’m thrilled to be writing this guest post for Natalie.

So, on the 9th March I attended the Women of the World Festival (WOW), which was held at the Southbank Centre and it celebrates the formidable strength, and inventiveness of women. 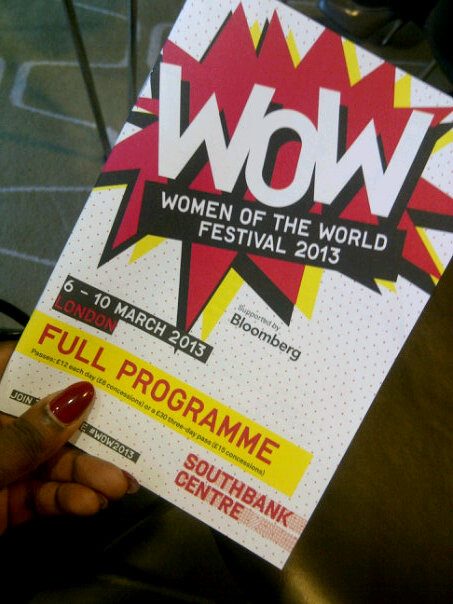 The talk I was most looking forward to attending at the event was titled ‘Weave VS Natural? The Politics of Natural Hair’ and the synopsis was “For centuries, women of colour have been told that their hair in its natural state isn’t good enough. Do we judge black women by whether or not they straighten their hair? Is the Afro still a political hairstyle? And do Michelle Obama’s bangs really matter? 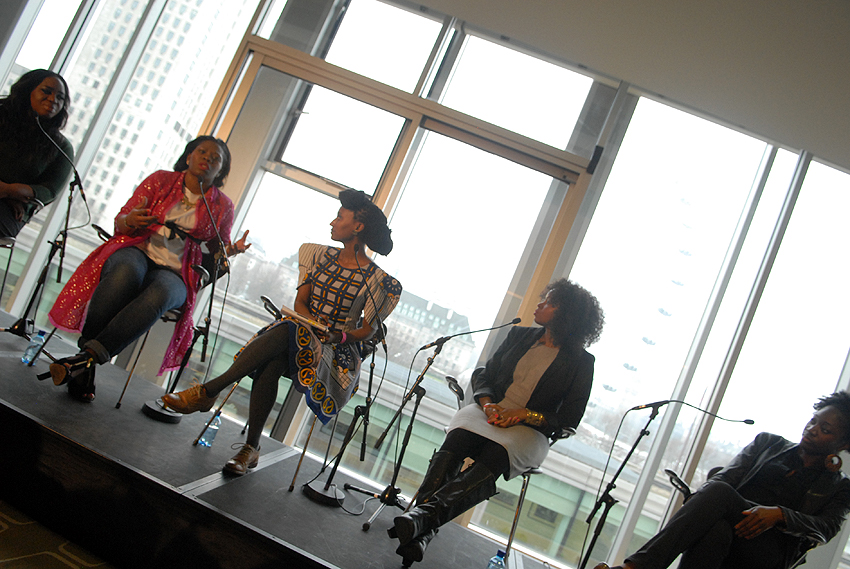 Now, I have to admit that when I first heard the title of the event “Weave vs Natural” it conjured up an image of a duel, where the weave wearers are waving their weaves against the naturals twist outs! So it was a pleasant relief that it was a lively yet peaceful debate, without a duel challenge in sight!

I loved the fact that the event attracted so many beautiful and diverse women of colour, all with a variety of different hairstyles – weaves, naturals, braids etc. and it wasn’t polarised or focused or any one particular hairstyle or hair type. This, I believe allowed for a wide variety of viewpoints during the debate and was definitely to the credit of the panel, and to Hannah as chair, as she skillfully directed certain topics of conversation to much calmer ground.

One of the biggest topics of discussion was on the subject of Michelle Obama, and how she wears her hair. Now, you might have seen the images of the first lady wearing a photoshoped afro that went viral last year. The question was, does Michelle Obamas hair really matter? And would she ever be able to wear her hair in an Afro? 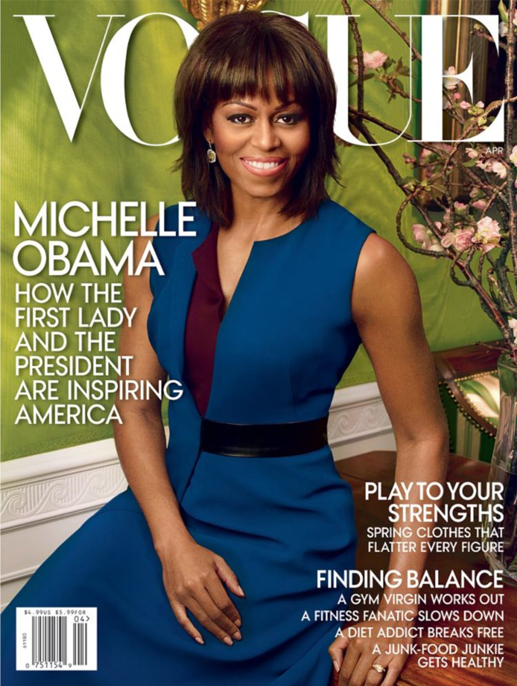 Mrs O – does her hair matter?

General consensus and I agree, is that whilst I love the first lady, her hair and how she chooses to wear it, absolutely does not matter, or affect me in any sort of personal way. If she did however choose to wear her hair in an afro this would definitely be seen as a big statement and as the panel highlighted would lead to a lot of commentary and discussion! For this very reason, rightly or wrongly, I don’t think that as a woman in her current position as the first lady, she would be at liberty to do so.

This naturally carried on to an exploration of the issues and politics of being able to wear your natural hair in the work environment. Now I personally work in the creative industry, so wearing my natural hair big and proud has never been an issue. In fact it’s usually considered as being quite trendy and different. That being said, I do however believe that we live in a society where again rightly or wrongly, we are judged by how we look, and what is deemed as acceptable in some work environments might unfortunately be an issue in others.

Natalie raised a very valid point here when she mentioned that growing up there were certain unspoken hair rules, where for example “when going for an interview, you couldn’t really wear your hair in braids but after you got the job you could wear you hair in whichever style you wanted”

Now I personally can relate to that despite the fact that I mentioned, I work in a non-corporate environment where any fashion look or hairstyle is pretty much accepted.

Reason being that if I was going for an interview, in the same way that I would dress the part as suited to the role e.g. in a more corporate environment I would wear a suit and in a more relaxed environment I would dress to show my creativity. In the same vein I would also dress my hair accordingly in order to get the job. That doesn’t mean changing or conforming your hair to e.g. a weave or relaxer, I think it just means dressing yourself in the right way for each occasion you might be in.

This led onto another question on if celebrities have a responsibility to represent and showcase natural hair within the mainstream media. And if the influence of celebrity culture would bring about the acceptance of our natural hair?

I believe that the real issue here is the fact that as black women we are under-represented within prominent roles in mainstream media, so are not able to highlight the versatility and diversity of our hair/hairstyles. That is why Michele Obama’s hair comes under such scrutiny and is always being discussed.

Would the solution be for more of us to move into prominent mainstream media roles?

Whilst yes this might help, I don’t think it should be forced. Personally I’m a firm believer in the saying “to each their own”. People are individuals and by the very definition, we shouldn’t look towards anybody else to represent our hair or us. I don’t think that celebrities owe us anything and I believe that they are entitled to wear their hair however they may wish and not be beholden to a society. To quote Funmi Fetto “We cannot put the burden on certain people such as celebrities to make them wear their hair in a certain way and be the savior of all black women” 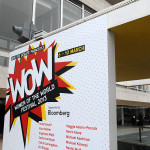 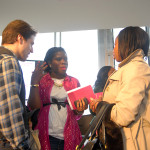 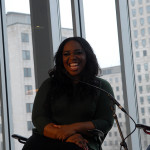 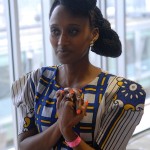 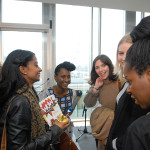 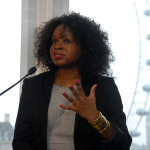 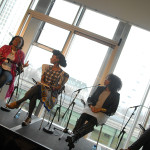 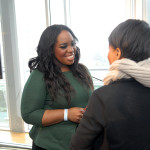 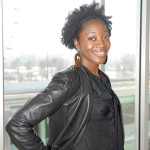 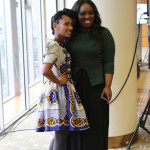 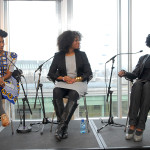 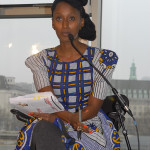 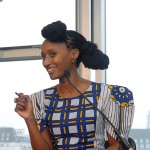 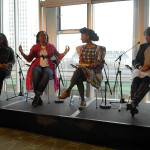 So Weave VS Natural – the final question is, does it really matter? As a former relaxer user who transitioned, then turned fully natural and is now weaving a weave as a protective style, I don’t think it does.

I think hair is simply that – it’s just hair! And as black women we should look at how we can unite and build each other up. Your hair doesn’t define who you are as a person and it should definitely not divide us as women. I believe you are entitled to the wonderful gift of choice and that one of the amazing things about being a black woman is the versatility of our hair and that we can wear it in so many different ways if we choose to do so. The important thing is to take care of your hair and to love and nourish it regardless of the way you choose to wear it. I leave you with two more quotes that I thought were inspirational from the fantastic Funmi Fetto:

“We need to get to the point where we are so good at what we do that how we wear our hair doesn’t really matter” and “Your identity should not be steeped in what your hair looks like, it’ needs to be steeped in something much deeper”.

Thanks so much Segun!

Did you miss the event? Check out the video of the highlights from the debate below! The video has been viewed by over 1000 people to date – thanks so much for your support!!

← Mind Your Own Business Series: Harriet Cudjoe – Founder and Director of the @Afrotherapy Salon
THE 2013 @ColourTrophy @MIZANIUK AFRO LOOK AWARD FINALISTS HAVE BEEN ANNOUNCED! →