The past few weeks has seen an eruption of #blackboyjoy in the beauty and fashion circuit!

At the beginning of April, the internet broke with the news that Edward Enninful OBE, the Ghanaian-born former model and stylist will take over from Alexandra Shulman as the editor of British Vogue.

I never thought I would see this day !! Congratulations @edward_enninful OBE your deserve this !!! I'm truly Happy for you words cannot describe how I feel for you right now . And for what you will do in bringing people together being at the Helm of @britishvogue . God is the greatest !!! I Love you #EDITORINCHIEF #EDWARD ENNINFUL OBE #BRITISH VOGUE. #TODAY HISTORY WAS MADE

The news was MAJOR! Instead of selecting a replacement from the usual demographic that dominates the magazine and fashion industry – the upper/middle class, white woman – Condé Nast International, the owner of the Vogue empire, opted to appoint its first male editor in its 101-year history, and the first ever black editor of a mainstream British style magazine.

I am not going to lie, I felt like it was my very own brother had been appointed. I felt like how I guess African American’s felt when Obama was elected in 2008 – a glass ceiling had been shattered – and it felt REAL good! (Aunty) Naomi summed up our #blackandbritish collective jubilation in her IG post above!

FEELING THE LOVE! THANK YOU to EVERYBODY who sent flowers and messages of support xoxo

Jonathan Newhouse, the chairman and chief executive of Condé Nast International stated that:

“By virtue of his talent and experience, Edward is supremely prepared to assume the responsibility of British Vogue.

He is considered to be an influential figure in the communities of fashion, Hollywood and music which shape the cultural zeitgeist.”

His appointment to one of the most prestigious positions in British journalism comes despite black Britons being severely under-represented in UK newsrooms. According to a 2015 study by the Reuters Institute for Journalism at Oxford university, black Britons make up just 0.2 per cent of newsrooms in the UK. 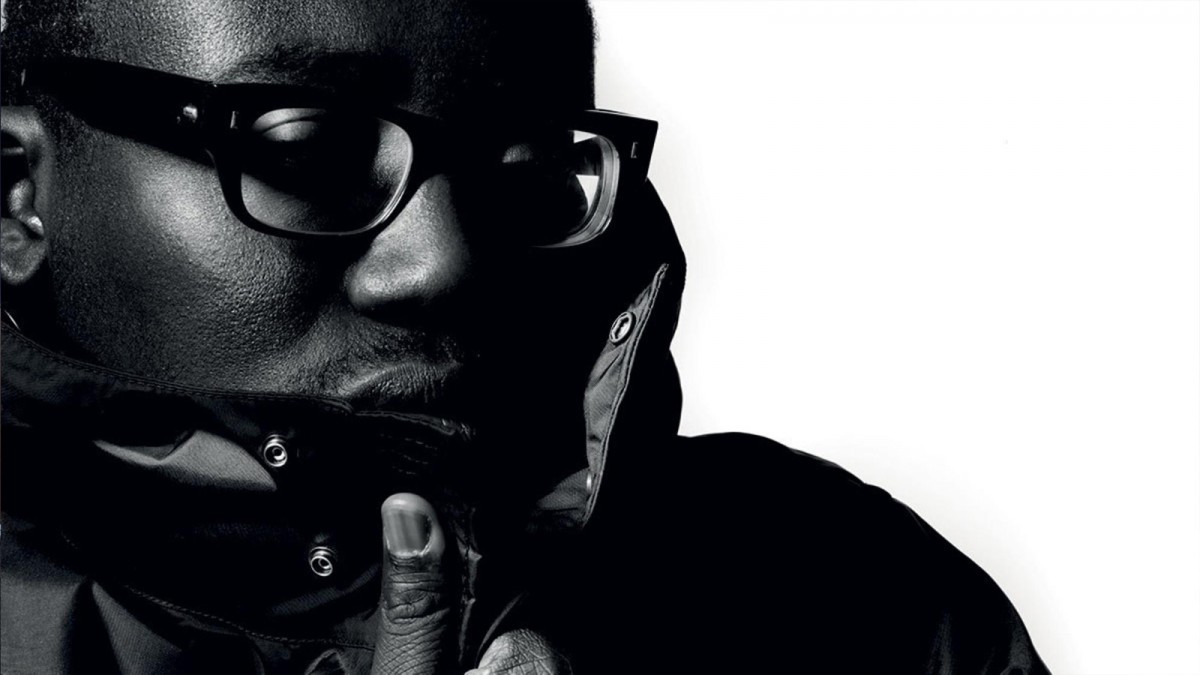 Enninful is more than qualified for this role having worked in the fashion industry for over three decades, starting of as a model at the age of 16 and going on to hold prestigious positions as the fashion director of iD magazine at the age of just 19 years old and the more recently, the creative and fashion director of the American fashion magazine W. Also, do you remember the ground breaking, bestselling Vogue Italia ‘Black Issue’ that was published in 2008? Well, Enninful, spearheaded the project, declaring his intention to “end the white-out dominates catwalks and magazines”.

After the original run of the issue sold out in the U.S. and U.K. in 72 hours, Vogue Italia has rushed to reprint 30,000 extra copies for American newsstands, another 10,000 for Britain and 20,000 more in Italy to satisfy the demand. I have a copy stashed away too!

Early this week, it was announced that the Balmain creative director Olivier Rousteing is to design a capsule lipstick collection for L’Oréal Paris.

The #blackboyjoy in the #beauty and #fashion industry continues! . . #Repost @diarydirectory ・・・ Calling all make-up junkies! Balmain has JUST announced a collaboration with L'Oréal Paris, get the details over on diarydirectory.com now! #balmain #bblogger #loreal #beauty #olivierrousteing

Rousteing is known for his democratic approach to fashion and his desire to appeal to a wide range of women. In 2015 he collaborated with H&M on a high-street collection created to make his designs available to a greater audience, the advertising for which featured models from a diverse range of backgrounds, including British #brownbeauty Jourdan Dunn. 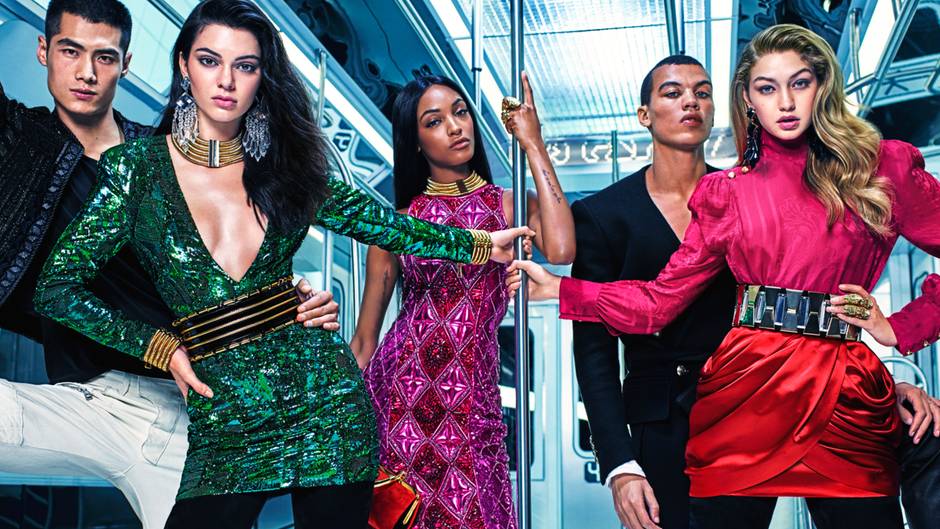 What I admire about these two gentleman is their outspoken stance on the need for increased diversity and representation in the fashion industry.

Late last year, Enninful collected an OBE for services to diversity in fashion. The recognition of his work on diversity was particularly valued, he said to the Guardian, because it wasn’t just about him. He has been an enthusiastic champion of non-white models, but insisted it must go beyond tokenism: “We need more diversity, from schools to internships to mentorships. That’s what I try to do”.

Olivier Rousteing was named the creative director of Balmain at the age of 26 and elaborated upon the experience to CNN; 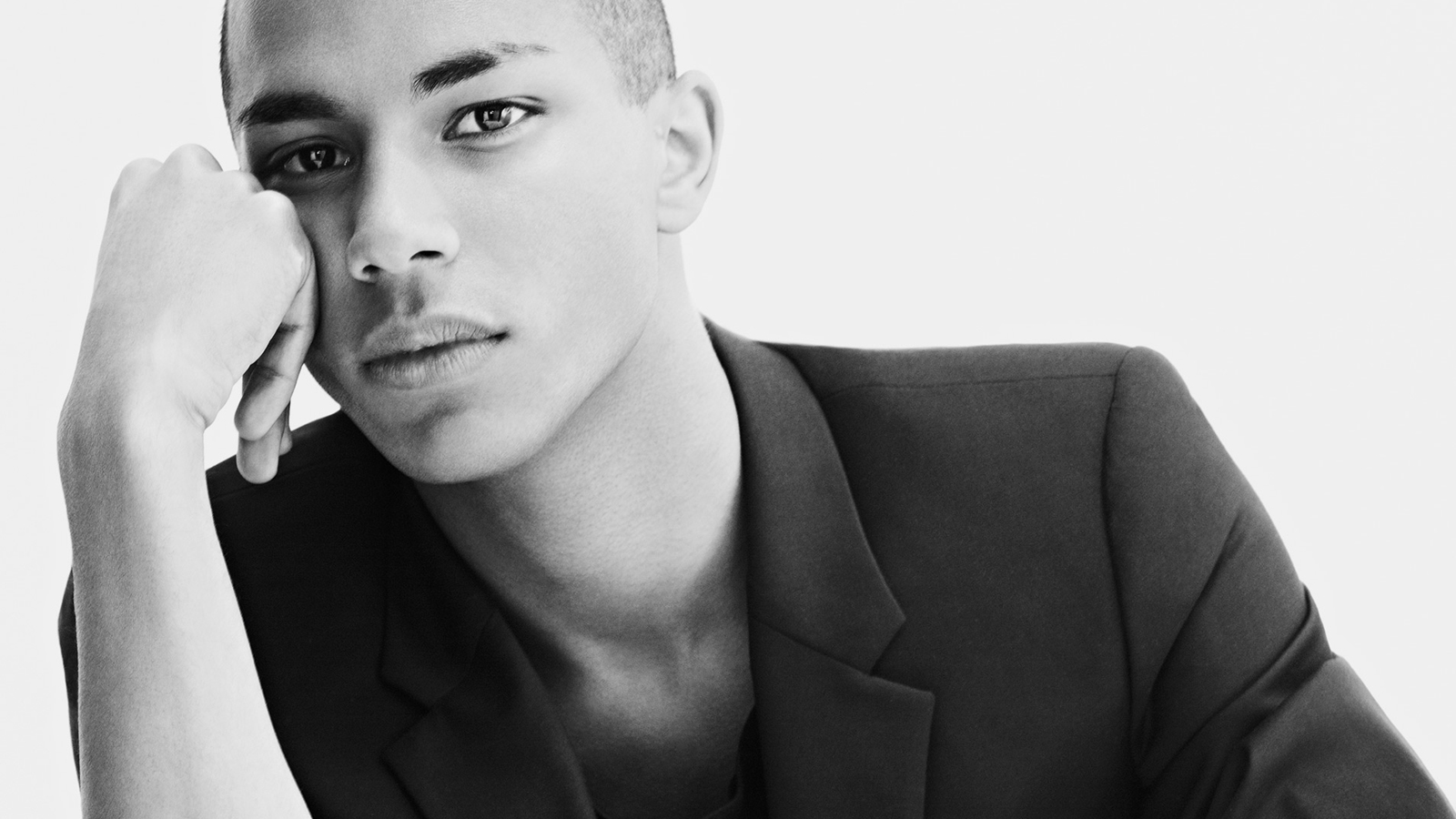 “…what was most shocking for a lot of people was not my age (I was 26 at the time) but my colour, and that really surprised me. Suddenly there was all these stories about me being the first black designer in a luxury, heritage fashion house.
Sometimes the fashion crowd think they’re really modern and avant-garde, but I think the system can also be quite old fashioned. I’m proud today to speak about a world where you walk down the street and see so much diversity, different people, different colours, different races. I decided to be a designer because I love clothes, fashion and the glamour of the fashion world. But I realised I didn’t want to just please the front row and the industry.
I have the chance to express way more than that: my vision of the world and diversity. It’s always been part of my life, part of my blood and mind, but it’s a topic that you can really express when you’ve grown up and you know who you are.
I want to reach people that dream big and that’s why, for me, diversity is such an important topic. It’s something that is part of me and something that I will always fight for.”

The magic that Enninful and Rousteing can create was witnessed in the 2014 photo shoot for W magazine, that featured Rihanna, Naomi Campbell and Iman, wearing top to toe Balmain. The shoot was styled by Enninful (and photographed by Emma Summerton). 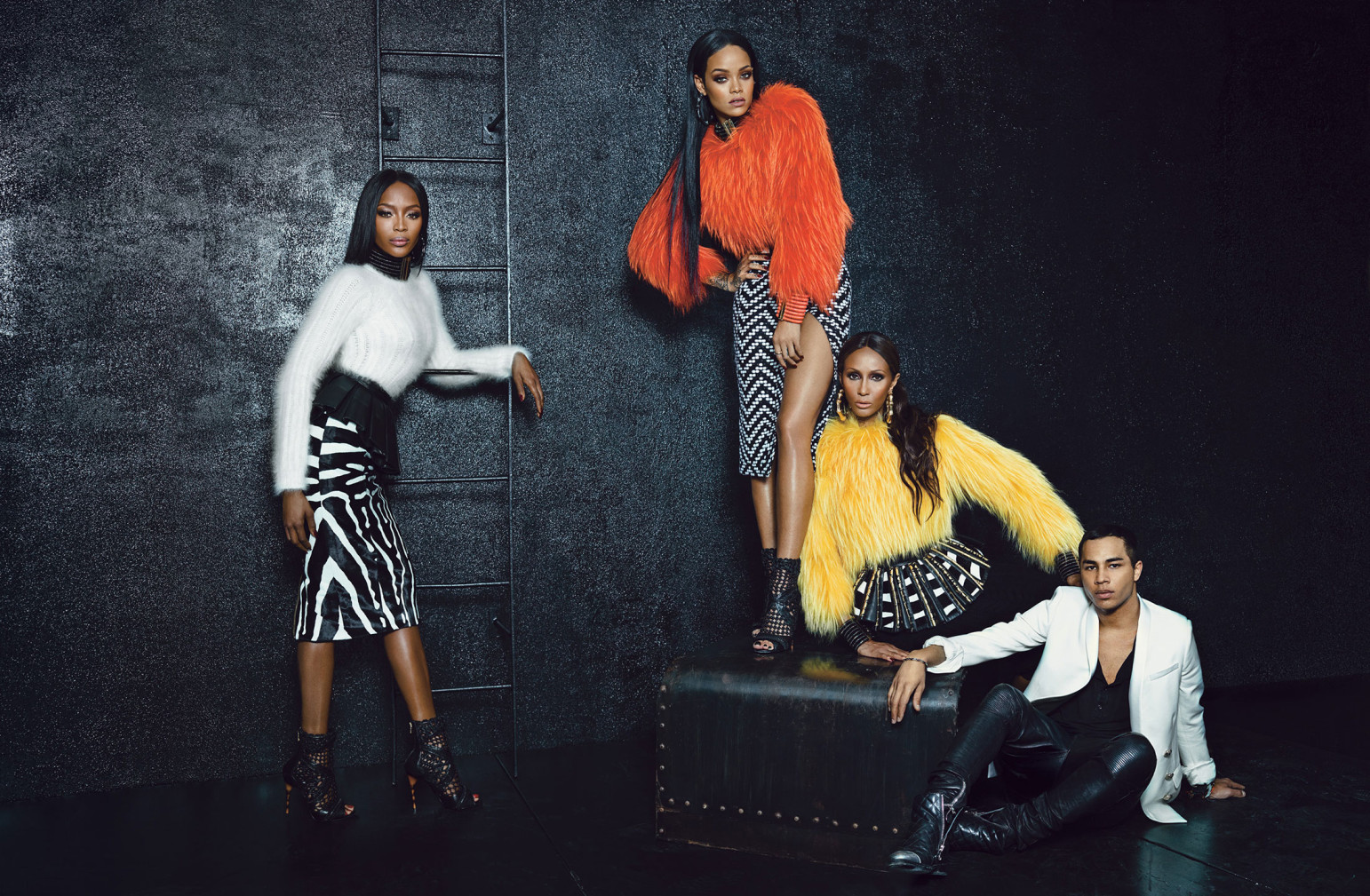 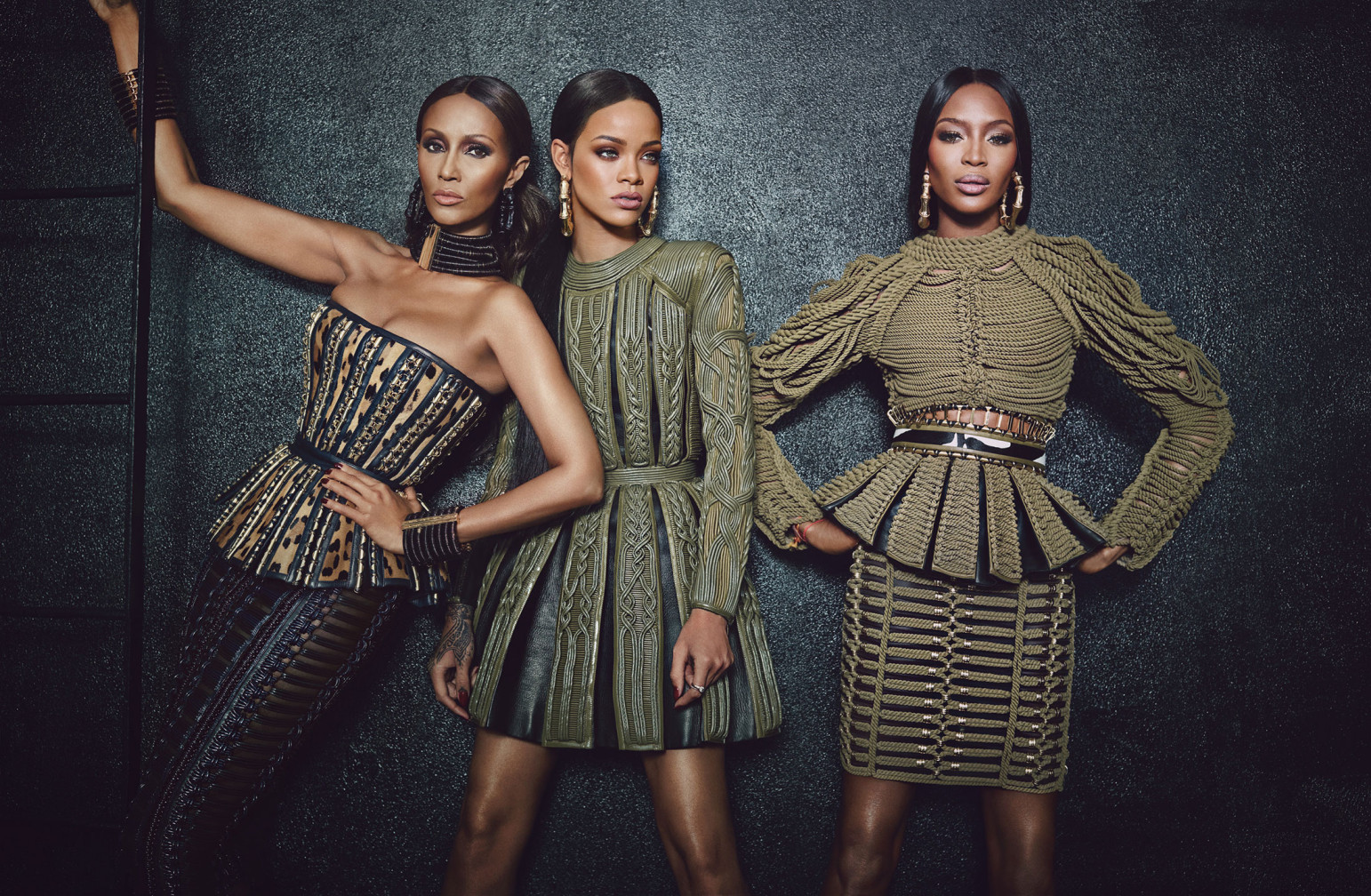 I look forward to seeing what these creative geniuses will produce for the world’s of fashion and beauty – both individually and collaboratively – in the future!