The international ‘fashion weeks’ kicked of in early February, which will culminate with the Paris Fashion Week which ends on the 9th March.

The ‘diversity’ issue is one that is often brought to the fore during this season and in the past I haven’t really written about this, as I felt that the industry has to show a more concerted effort in addressing the inequalities and genuine attempts to do so have seemed few and far between, however this year the actual treatment of the models of colour who were hired to walk the runway was highlighted in a way that brought their struggles into the mainstream – struggles that many women of colour can identify with, irrespective of their profession or the industry that they are employed in.

Over a handful of days the world witnessed several incidents highlighting the microaggressions that are faced by women of colour as a result of intersectionality. Slurs, insults and negativity directed at these women – often from OTHER WOMEN – based solely upon their ethnicity.

I have written about the plight of intersectionality in the past, with regards to the treatment of tennis supremo Serena Williams, and below is a definition of the term;

Intersectionality: a feminist, sociological theory which suggests that — and seeks to examine how — various biological, social and cultural categories such as gender, race, class and other axes of identity interact on multiple and often simultaneous levels, contributing to systematic injustice and social inequality.

Intersection theory can be defined as “the interplay of race, class, and gender, often resulting in multiple dimensions of disadvantage”.

Let’s take a look at what happened…

My lips giving you sleepless nights. On @maccosmetics IG. Thankyou @maccosmetics for this killer color and to that makeup artist .ama get me 3 of these.

…which INSTANTLY attracted a slew of highly racist slurs – the worst of which had to be deleted by the account admin.

Initially, 20 year model Maryse Kye responded to the trolls believing that the image was of her lips stating:

As I read the comments below this picture Felt so insecure and a bit embarrassed as I just wrapped up fashion week a time period that is tough on models especially black models as we encounter the harsh reality of the fashion world. But I kept reading (not sure why tbh) and saw so much love and support from strangers that made me smile :)As I turn 20 in a couple days this is a reminder of what i endured in the past and if I survived middle school in america I can get over this. The bullying and alienation from others solely based on my features and skin color did not stop me from doing what I want. I mean I just walked in NYFW…. And shout out to @maccosmetics for making a killer Lippie

…however it turns out that Kye made a genuine mistake and the model featured is in fact Aamito Lagum, who won the first series of Africa’s Next Top Model.

Irrespective of this, their responses are both valid, why should young women in their early twenties be subjected to such vitriol? There are reams of studies, articles and opinions on the socio-historical impact of the idealisation and normalisation of Western beauty standards on the woman of colour that has caused her to be deemed less beautiful by society, especially if her skin is dark. Do you remember the ‘less classically beautiful‘ jibe that was directed at the talented and extremely beautiful actress Viola Davis by a FEMALE New York Times journalist last year? ‘Nuanced’ comments such as this have been termed ‘racial microaggressions’ by the academic community.

On the morning of the 19th of February to this tweet by British Vogue inspired by the British model Leomie Anderson was trending on my timeline.

Once again, the trails of the model of colour was highlighted by Anderson, which she expressed in a series of tweets:

“Why is it that the black make-up artists are busy with blonde, white girls and slaying their make-up and I have to supply my own foundation?” she tweeted. “Why are there more white make-up artists backstage than black when black ones can do all races’ make-up? This is probably the first season that a white hairdresser hasn’t said to me ‘Oh I’ve done Naomi Campbell’s weave, I know what I’m doing.” 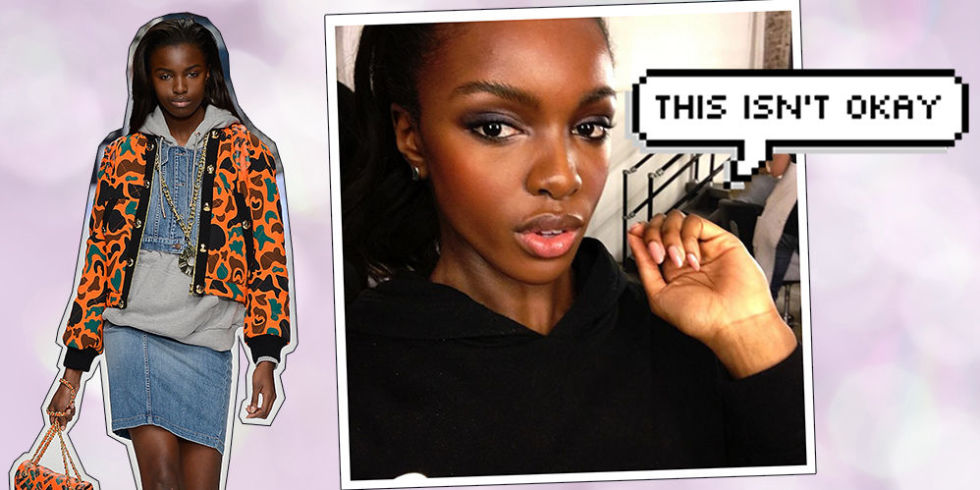 Why should a model STILL have to bring her own makeup and hair products (and even underwear) to a shoot! To me, this represents discrimination in the workplace, which would not be tolerated in other sectors…so why is this still the case in the fashion industry? Leomie labelled the MUAs ‘unprofessional’ – which I feel is fair as I would expect ALL MUAs working at that level to be prepared and have the skill set to work with all skin tones and skin types.

Australian born, Sudanese model Ajak Deng, who has walked the catwalks of Givenchy, Chloe, Lanvin and many other highly-respected fashion brands, posted on her IG on the 23rd of February that she planned to quit the modeling business, because she is done dealing with the “fakes” and “lies.”

Put your best foot forward. I am happy to announce that I am officially done with the fashion industry, I will be moving back to Australia In order to live the life that I fully deserved. Which is real life. I can no longer deal with the fakes and the lies. My life is too short for this dramatic life. I am thankful and grateful for every sweet souls that I have crossed path with.

Although her post does not specifically state that racism was the cause for her decision, I am sure it played a major part….

@bethannhardison thank God for you. yes we do.

In 2014, the model reportedly accused Balmain via her Twitter account (the account was then deleted) of removing her from the brand’s campaign for “being black” and in 2010, she made quite a statement in Alber Elbaz’s Lanvin for H&M runway (2010). 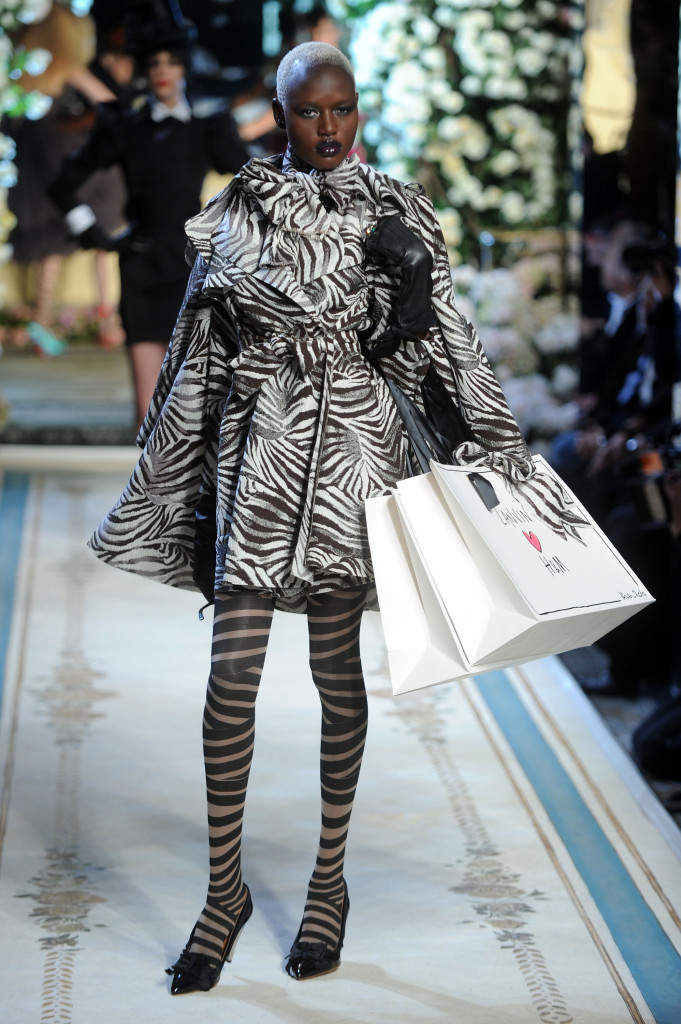 Lanvin for H&M Haute Couture Show at The Pierre Hotel on November 18, 2010 in New York City. (Photo by Jamie McCarthy/Getty Images for H&M)

Upon posting her message, the model received an outpouring of love and support from members of the industry and her fans and it looks like she has decided to stay in the game!

I remember my first season in Milan, walking through the the airport and saw @philipppleininternational campaign. Wishing I could one day be one of the faces up there, NOW all I can say is thank you for making my dream come true. P.s my first season in Milan, no one booked me and I was so destroyed because they won't booking black girls like me that season and thank god for my sweet and encouraging agent @meansss who told me that there was absolutely nothing wrong with me and that I was one of the most beautiful girl in the world, so wiped off those tears, come back to New York and let's change their minds one day at a time. She continued to support and still have my back even though I decided to throw it all away after our hard work and for that I came to realize that she is my spirit and a guiding angel. I was selfish to only think of my self and forgetting the people that has always been there for me through the worst times and good times. I feel like I have touched so many young people's lives, gave them hope. Just because I come from NOTHING does not mean that I can't make something for myself and for that I will still want to continued to touched more lives. Yes sure giving up is easier but who will fight the war that we are so in denial about? I am just getting started and modeling isn't the only Thing I will be successful in, in my life time. I apologize to every kind souls/hearts that I have broken in the past week. I thought giving up was easier but I am going to stay and fight this war with kindness, forgiveness, love and support to all humanity. We are all beautiful and deserved to be respected. #BigLoveToHumanity.

I salute Deng’s tenacity and willingness to take a stand, as the continual onslaught is exhausting, but with the rise of social media and the ability for us to control our own narratives, coupled with the increased demand on the industry to be accountable for what is taking place, I believe the change that is needed will transpire.